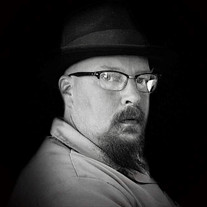 Aaron S. Ramsey, age 56, passed away unexpectedly on Tuesday, October 5, 2021 at home in Travelers Rest, SC with his wife, Ronda by his side. Aaron was born December 14,1964 in Peoria, IL to Eddie Ramsey and the late Sheryl Arnett Timian. He leaves behind his loving wife Ronda Ramsey (Schierenbeck), a son Dustin-Hudson Ramsey of Pekin, IL, two sisters, Rachael Ramsey of Kingston Mines, IL., Jami (Trent) Lawrence of Delavan, IL and a brother, Tony Timian of Pekin, IL. his father, Ed (Dottie) Ramsey of Bowling Green, KY, a step-father, Fritz Timian of Pekin, IL, a father-in-law, Ronald Schierenbeck, a sister-in-law, Jody Schierenbeck both of Bradley, IL. a brother-in-law, Scott (Patty) Schierenbeck of Manteno, IL and many nieces, nephews, cousins, aunts and uncles. Aaron graduated from Pekin High School. He was a dedicated Quality Control Inspector at Haggerty Steel for many years and a driver for Atlas Supply Co. Aaron and Ronda met in 1992, fell in love, married on October 27, 2005 then relocated to the beautiful state of South Carolina in 2015, because there was TOO MUCH SNOW to shovel in Illinois. Besides spending time with family and friends, Aaron had a passion for all things outdoors: including traveling, camping, hunting, target shooting, axe throwing to name a few of his hobbies. He was a master craftsman and could often be spotted taking discarded furniture from dumpsters (dumpster diving) only to meticulously restore these prizes into retro masterpieces. Known as Fuzzy as a child, Aaron’s sense of humor earned him the reputation as the life of the party. He was always happy marching to the beat of his own drum. He was a collector of very fine bourbons, loved classic country music and all things Scottish. He touched many lives with his generosity and passion for life. Aaron will be sorely missed by his family, friends and his beloved wiener’s (3 dachshunds). Aaron was proceeded in death by his mother, Sheryl Timian and his mother-in-law Janet Schierenbeck. Family and friends are invited to attend a Celebration-of-Life gathering at a future date to be determined. In honor of Aaron, the family requests donations to the Rheumatoid Arthritis Foundation. To express condolences and share photos, please visit www.cremationsocietyofsc.com.

Aaron S. Ramsey, age 56, passed away unexpectedly on Tuesday, October 5, 2021 at home in Travelers Rest, SC with his wife, Ronda by his side. Aaron was born December 14,1964 in Peoria, IL to Eddie Ramsey and the late Sheryl Arnett Timian.... View Obituary & Service Information

The family of Aaron S. Ramsey created this Life Tributes page to make it easy to share your memories.

Send flowers to the Ramsey family.