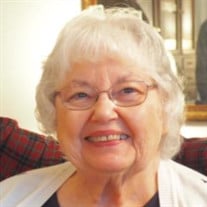 Barbara Lou Brannon was born on September 10, 1933, in Lawrenceburg, Kentucky, to Merrill Gates Brannon and Eva Edna Bowles Brannon. Her mother's stepfather delivered her. Mama had an older sister, Ann Ashley, and a younger brother, Dr. Donald Brannon. Both siblings preceded her to heaven. Surviving are her three children: Lou Ann (Roy) Keiser, David (Sylvia) Gass, and Ruth Dechant. She had seven grandchildren and thirteen great grandchildren. Barbara's husband of 66 years, Jerry, went to be with the Lord only nineteen days before her. Barbara grew up on her paternal grandparents' farm in West Virginia, living in the house her grandfather built. From first grade through high school, she attended the same school in Troy, West Virginia. She accepted Christ as her Savior at fifteen years of age. Barbara wrote, "When I was twelve, I joined the church because my friend Louise did. I didn't realize what I was doing and began to wish I had not followed her up the aisle. This bothered me for three years, for I knew that I didn't know the Lord personally as my Savior. But when I was fifteen, alone in the meadow above the house, I experienced the forgiveness of sin. A great weight was released. Accepting what Christ had done for me was the beginning of a life of joy and blessing." After graduating valedictorian from high school, she studied at Glenville State College, where she worked in the president’s home. She met Jerry in college and graduated in three years with a degree in education. Before and after she married Jerry in 1955, Barbara taught kindergarten at the West Virginia School for the Blind in Romney, giving her students a foundation in Braille. Then she taught first grade in Morgantown, WV, at Oak Grove Elementary. While Lou Ann and David were small, Barbara took a break from teaching, returning when they were both in school. She taught several years at E. S. H. Greene Elementary School in Richmond, VA. While Ruth was in school, Barbara taught sixth and seventh grades at John C. Meyers Middle School in Broadway, VA. Barbara was always active in church. She taught Sunday school and junior church. She opened her home to pastors, missionaries, traveling musical groups, college evangelistic teams, the Navigators from local colleges, as well as friends and family. Barbara shared the gospel in hospitals, nursing homes, and everywhere she went. Her heart was in tune to the Holy Spirit's leading. Barbara often praised God. In early 2016, she said, “God is so good. I look back over my life, and I am so blessed. God has been good to me. I’ve had a wonderful life.” Burial will be in the family cemetery on the farm where Barbara grew up. Donations may be made in Barbara Gass's honor to Vision 20/20 Asia General Fund c/o IGM, 990 Calkins Road, Rochester NY 14623.

The family of Barbara Lou Brannon Gass created this Life Tributes page to make it easy to share your memories.