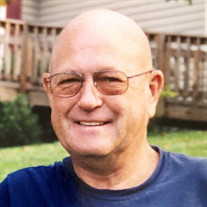 Bruce A. Robbins, 83 of Woodruff, SC, formally do Dundee, N.Y., passed away Thursday, October 21st, 2021 in the comfort of his home surrounded by his family. He was born on Monday, August 1st, 1938 in Dundee, N.Y. to the late Harry D. and Helen L. Cornish Robbins-Dean. Bruce is loved and will be missed dearly by his wife of 64 years, Brenda E. Bills Robbins; his children, Terance L. (Melody) Robbins of Batesburg, SC, Gregory B. (Emily) Robbins of Woodruff, SC and Kimberly R. (Paul) Cooper of Enoree, SC; his grandchildren, Chad A. (Jessica) Robbins of Columbia, SC, Jessica L. (David) Mulhall of Cowpens, SC and Christine (Eric) Quail of Beloit, Wisconsin; his great grandchildren: Tony and Chris Mulhall of Cowpens, SC, RyAnn Ashlee, Cooper Melissa and Wyatt Aubrey Robbins of Columbia, SC. Bruce graduated from Dundee Central School in 1957. Before he even graduated, he was working as a mechanic at Foreman’s Gas Station and was in the Police C.D.’s for Dundee at the Dundee Speedway Track. (C.D.’s were volunteer police). He then became Manager of the Dundee Bowling Alley for approximately 5 years. He then went to work for Morgan Construction. While working for then he helped to build the Himrod Salt Mines and the A&P plant in Elmira , N.Y. From there he went to work for Powell Construction, then to Jeffrey Dresser where he worked for 27 years until his retirement. Working for Jeffrey Dresser gave him the opportunity to travel the world. (Including Cairo, Egypt). After retiring, not one to sit still. He ran out of things to fix at home, so he went back to work at the KMart in Mauldin, SC. That lasted approximately 2 years as their Maintenance Man. Bruce was a Welder, teaching the trade to both of his sons. He enjoyed boating, camping and woodworking. He was a “Jack-of-all-Trades.” Bruce was known and liked by many. He knew his job and enjoyed talking about it and the places he had been and the different things he had seen. He worked and lost many comrades before him but he made a best friend and even considered Bill (Donna) Laster his brother. I’m sure if there is a Golden Corral on the other side, Dad will be sitting in the lobby waiting for Bill to get there! Along with his parents, Bruce was predeceased by his younger brother James A. Robbins and his son Brian Anthony Robbins. Honoring his wishes there will not be a service or funeral.

Bruce A. Robbins, 83 of Woodruff, SC, formally do Dundee, N.Y., passed away Thursday, October 21st, 2021 in the comfort of his home surrounded by his family. He was born on Monday, August 1st, 1938 in Dundee, N.Y. to the late Harry D. and Helen... View Obituary & Service Information

The family of Bruce A. Robbins created this Life Tributes page to make it easy to share your memories.

Send flowers to the Robbins family.