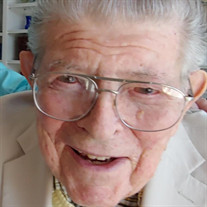 Charles R. “Dick” Plumb, 97, passed away peacefully on Sunday, May 8, at his home in South Carolina. He is survived by Juanita, his beloved wife of 76 years; children Christina (Torres), Charles “Rick,” Kimberly (Cahill), and Stephen; son-in-laws Mark Torres and Bob Cahill; and grandchildren Laura, Evan, Danielle, and Addison. He lived a long, prosperous life filled with an abundance of love and happiness. In addition to spending time with family and friends, Dick enjoyed traveling, golfing, playing cards (especially Bridge), singing in various choirs, “fine dining” (starting with a Perfect Bourbon Manhattan and ending with a piece of pie) and watching U-M football – he had season tickets for more than 50 years (Go Blue!). Born in Yates Center, KS, in 1924, Dick was the only child of Charles and Claire (Plummer). He met Juanita in high school, where they played the romantic leads in a school play and worked on the school newspaper together. After starting college at the University of Kansas, Dick enlisted in the U.S. Navy as part of the V-12 College Training program during World War II. He married Juanita on June 25, 1945. After the war, Dick earned a bachelor’s degree in journalism and an MBA from the University of Michigan. Early in his career, Dick worked as a reporter and editor for several daily and weekly newspapers in Michigan, including the Detroit Free Press. He later served as an editor and director of marketing for Automotive News, a national trade magazine, in Detroit. In 1969, Dick joined Rockwell International and found his professional calling as a public relations executive for a large automotive and trucking supplier. Eventually becoming director of communications for Rockwell’s light vehicle components business, Dick was the consummate PR guy known for his attention to detail, clever publicity ploys, memorable press trips, and, most of all, building long-lasting relationships with journalists, many of whom became lifelong friends. In 1991, Dick and Juanita retired to Salem, S.C., where they built their “dream home” on Lake Keowee. They later moved to Stone Mountain, Ga., where they lived until returning to Seneca, S.C., in 2020 to be closer to family. Wherever he lived, Dick loved spending time with friends and family. He also was active in the Episcopal Church and various civic organizations, including the Kiwanis Club, Public Relations Society of America, Troy (Mich.) Chamber of Commerce, Tuberculous Association, American Lung Association, National Safety Council, and Greenfield Village Old Car Festival. Please share your favorite memories of Dick with us. The family held a small memorial service in Seneca. In lieu of flowers, please make a donation to Hospice & Palliative Care (www.hpcpr.org) or to Maize & Blue Cupboard (https://mbc.studentlife.umich.edu).

The family of Charles R. "Dick" Plumb created this Life Tributes page to make it easy to share your memories.

Send flowers to the Plumb family.