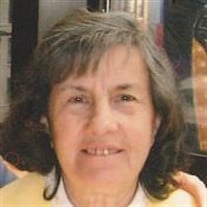 Charolette Ann Giampino, 84, was welcomed home on March 20, 2022, with her daughter by her side. Charolette was born on January 10, 1938, in Newark, NJ to Charles Ziegler Sr. and Elizabeth Ziegler (nee Hoffman). She married Alfred L. Green and they had 3 children together and later remarried to Raymond H. Giampino who preceded her in death in 2000. She was a doting mom to her three children while also working as a career claims insurance representative, and shortly before retirement, as a crossing guard in Cranford, NJ, the place she called home for most of her life. Charolette was the family matriarch around whose table everyone gathered to celebrate the holidays that she loved to decorate for. She regularly attended services at the Episcopal Church to which she belonged, where she met her husband of many years and was a member of the church's order, the Daughters of the King. Her faith and trust in God sustained her throughout the tumultuous times in her life and was a value she instilled in her children and grandchildren. She led an active social life geared toward service as a member of the Eastern Star and past president of the Rebekahs within the Independent Order of Odd Fellows. She loved reading, puzzles, ballet, country music, and animals. Charolotte was always on the go and loved to "see the world" as she put it, frequently traveling to NYC with her sister to see musicals and learn about history at the many museums. She loved to socialize, attending church with her longtime friend, Joan, after her husband's passing, and later enjoying the company of a tight-knit group of friends in Jonas, PA, and then in Moore, SC, where she moved to from Cranford. In her golden years, she lived with her daughter, Elizabeth, and spent much of her time with her grandson, Brian, whom she loved more than anything. Charolette is dearly missed and will always be remembered as a generous and gentle, kind, loving person, beloved by her family and friends, who will hold her in our hearts forever. Devoted mother of Daniel Green, Elizabeth Green, and the late Michael Green Sr. Loving Grandmother to Brian Forte and Michael Green Jr. Adored sister to Jean Bailey, Darlene Tamburro and the late Charles Zeigler Jr. Dear sister in law to Bergel Zeigler, and missed by several nieces, nephews, and cousins.

Charolette Ann Giampino, 84, was welcomed home on March 20, 2022, with her daughter by her side. Charolette was born on January 10, 1938, in Newark, NJ to Charles Ziegler Sr. and Elizabeth Ziegler (nee Hoffman). She married Alfred L. Green... View Obituary & Service Information

The family of Charolette Ann Giampino created this Life Tributes page to make it easy to share your memories.

Send flowers to the Giampino family.