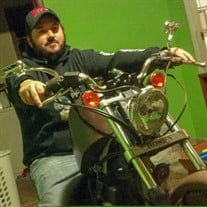 Christopher Wynn Harrelson, 37, is a loving and devoted father, husband, and friend. He was an incredible man whose life was cut short on Sunday, October 24, 2021. Christopher was born in Fort. Benning, GA, November 20, 1983. He was raised in Phenix City, AL. Chris relocated his family to Greer, South Carolina in September of 2019. He bragged about how much he enjoyed seeing the mountains every day. He attended church whenever he could and liked playing football. He loved working on old cars and playing video games. He enjoyed family time more than anything and was dedicated to his family. He met his wife just as he was coming out of high school. They became inseparable when they met. Before dating Chris told Mary’s mother that he was going to marry her daughter, they spent 18 wonderful years together. Christopher and Mary had 3 amazing children, Andy (15), Christopher Jr. (11), and Henlee (5). Chris is also survived by his grandparents, Lee and Catherine Mulligan. Chris is preceded in death by his grandfather Clifford Henderson, his grandmother-in-law Hilmer A. Fox, and Grandfather Wayne King Christopher leaves behind his loving wife of 18 years Mary Harrelson, sons Andy Harrelson, and Christopher Harrelson Jr., and daughter Henlee Harrelson. Grandmother Dora Henderson, Grandfather Randell Fox, Father, and Mother-in-law David and Carol Beasley, Father Andrew Harrelson (Kim), Mother Patrica Munson, Sister-in-law Susan (Jerry, who was also one of Chris’s closest friends) Rolison, Sister-in-law Charity Beasley, Brother-in-law Starlin Beasley, Brother Drew Harrelson, Brother-in-law Stephen Beasley, Brother-in-law Daniel Beasley, Half-sister Angelica Thompson. Many nieces, nephews, cousins, and other friends and family members will all love and miss him dearly.

Christopher Wynn Harrelson, 37, is a loving and devoted father, husband, and friend. He was an incredible man whose life was cut short on Sunday, October 24, 2021. Christopher was born in Fort. Benning, GA, November 20, 1983. He was raised... View Obituary & Service Information

The family of Christopher Wynn Harrelson created this Life Tributes page to make it easy to share your memories.

Christopher Wynn Harrelson, 37, is a loving and devoted father,...

Send flowers to the Harrelson family.