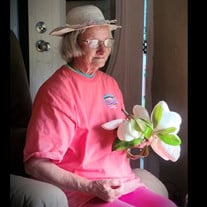 On Monday, September 13th, 2021 at 9:45 pm, Heaven&#8217;s Gates opened to welcome Mrs. Cora Mae Smith for her homecoming. She was born on Thursday, March 27th, 1947 in Greenville, SC to her parents: the late William Buster and Mary Rebecca... View Obituary & Service Information

The family of Cora Mae Smith created this Life Tributes page to make it easy to share your memories.

Send flowers to the Smith family.