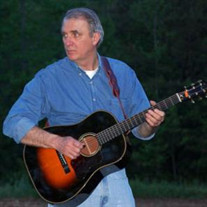 Daniel 'Danny' Bruce Henderson passed away peacefully after a valiant battle with multiple myeloma. Danny was preceded in death by his mother Mae Drue Henderson; and one brother, Donald (Donnie) Henderson. He is survived by two brothers, Joseph (Deborah) Henderson of Bonifay, Florida, and Jimmy Henderson of Panama City, Florida; and his sister, Brenda Lovelle of Cold Springs, Texas. He is also survived by two nephews, Kevin and Lance; three nieces, Dea, Tina, and Seanna; and numerous great-nephews and nieces, extended family, and friends. In addition, Danny is survived by his longtime companion and love, Jeanne Dove; and many “honorary” children and grandchildren who loved him dearly. Danny’s celebration of life will be held on Saturday, September 18th at 11:00 AM at Unity Church, 207 Belvue Rd, Taylors, SC 29687. The service will be live-streamed for those who cannot make it. The service can be viewed at unitychurchofgreenville.org or Unity of Greenville’s Facebook page. In lieu of flowers, a donation can be made towards the Memorial Fund, 300 Longstreet Dr, Greer, SC 29650. Danny graduated from Holmes County High School in Bonifay, FL, and then Chipola Junior College in Marianna, FL. Danny moved to Greenville, SC in 1994 and was a member of Unity Church of Greenville where he played in the church band for many, many years. He worked for IBM Global Services, New Horizon Family Health Services, and most recently retired from Michelin. Danny had many interests and talents and was an observer and true lover of nature. He enjoyed camping and hiking. He was an avid bird watcher and could identify a bird’s species from listening to its call. He was a talented musician and played the guitar and banjo. He played in multiple bands and had many musical friends that he kept in touch with throughout the years. He was a talented photographer and would journey up to the mountains of Western NC in the early morning hours and set up his camera to capture a spectacular sunrise or beautiful waterfall. He often created rock formations at the shores of rivers and creeks for people to happen upon and enjoy. If you’ve ever hiked the mountain trails of W. NC and came across a stacked rock formation, there is a good chance it was Danny’s. He had fond memories of his grandmother and bragged of her cooking. Danny made her delicious pound cake and sweet potato pie recipes during the holidays. He was a master at canning jams and preserves and would generously give them away to friends to enjoy. Danny was a devoted partner to Jeanne and often said he was a “grandpa in training” to her grandchildren. He needed no training, however, as he was a natural and a big kid at heart. While at Michelin, Danny lived and worked in France for two years and it was one of the highlights of his life. He made several close friends there whom he kept in touch with. The French culture made a lasting impact on him. He looked forward to going back one day. With the news of Danny’s passing, many friends and family wrote comments that best describe the person that he was. He would have been greatly pleased to read these. “I will miss my dear friend. The calmest person I ever met and a heart of gold.” “Gentle, but powerful. Fierce but kind. You will be missed.” “He was truly a beautiful soul.” “Heaven will have more beautiful music now.” “Danny was a special guy and will be missed by all of us at his Michelin family.” “We used to play music together and speak French…I will always say that Danny was a great friend and a beautiful human being.” “He has such a sensitive, insightful heart.” “Danny always had a way to lighten the room.” “He was such a classy, fantastic person… It’s been an honor to know you.” “There will be music and beautiful rock formations like Heaven has never seen.” “He always had a good approach to life regardless of the circumstances…he was one of the good guys.”

Daniel 'Danny' Bruce Henderson passed away peacefully after a valiant battle with multiple myeloma. Danny was preceded in death by his mother Mae Drue Henderson; and one brother, Donald (Donnie) Henderson. He is survived by two brothers,... View Obituary & Service Information

The family of Daniel Bruce Henderson created this Life Tributes page to make it easy to share your memories.

Daniel &#39;Danny&#39; Bruce Henderson passed away peacefully after a...

Send flowers to the Henderson family.