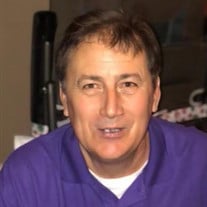 Donald Scott Raushenberger, 61, passed away on Thursday, October 7, 2021, surrounded by his loving family. Scott was born in Greenville SC to the late Bobbie Jean Johnson and Thomas Louis Raushenberger. He lost his father at the young age of 4 years old. His mother raised him, along with his two brothers and his sister, the late Lynn Shannon. Scott met his beloved wife Tammie in 1979. They were married in 1980 and started a family. They were blessed with three loving children and five wonderful grandchildren. Scott had a lifelong career in construction, eventually owning an insulation company. Scott was well known for his adoration of his family, one of a kind sense of humor, and his admirable work ethic. He enjoyed being the life of the party and wasn’t satisfied until everyone was laughing. He loved watching all sports and could be found most Saturdays cheering on the Clemson Tigers. He also loved animals, often surprising his wife, children, and grandchildren with a new puppy or kitten. Scott had a zestful way of living and loved nothing more than spending time with his family, especially his precious grandchildren. Scott is survived by his loving wife Tammie, his children Tory Raushenberger(Heather), Tiffany Jones, and Todd Raushenberger(Kaci), his grandchildren Kylee and Talon Raushenberger, Payton Jones, Graham, and Daisy Raushenberger, his brothers Michael Raushenberger(Linda) and Bruce Raushenberger(Sherry), his mother-in-law Barbara Elgin, father-in-law Doyce Elgin, brother-in-law Terry Elgin(Jennifer), brother-in-law Tobey Elgin(Stephanie), a faithful dog, Taffy, and multiple nieces and nephews. Scott left a lasting impression on everyone he met. Please help us remember and celebrate his life on Sunday, October 17, 2021, at 3:00 pm at College Park Church, 8211 White Horse Road, Greenville SC 29617. In lieu of flowers, donations can be made to The American Heart Association.

Donald Scott Raushenberger, 61, passed away on Thursday, October 7, 2021, surrounded by his loving family. Scott was born in Greenville SC to the late Bobbie Jean Johnson and Thomas Louis Raushenberger. He lost his father at the young age of... View Obituary & Service Information

The family of Donald Scott Raushenberger created this Life Tributes page to make it easy to share your memories.

Send flowers to the Raushenberger family.