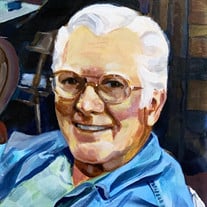 Edward Etheldred Brower, Jr. of Greenville, SC passed away peacefully in his home Friday evening, August 20, at age 93 surrounded by love and family. Born in Parsons, TN to parents Eddie and Edward Brower Sr., Ed attended the Harris School of Advertising Art in Nashville, TN where he met and married his loving wife of 68 years, Charlotte Boyd Brower. At age 22, he joined the Tennessee National Guard and served as the youngest Master Sergeant in the US Army in Korea until his honorable discharge several years later. After teaching at the Harris School for two years, he began his illustrious career in advertising as an Art Director and Vice President at Alex T. Franz Advertising in Chicago and served as President of what is now known as the National Association of Communication Arts. During this time, he made a name for himself not only as the man behind the ads but also, occasionally, as the star of them; most notably, Ed could be seen for many years as the real-world embodiment of the Culligan Man. Upon moving to Greenville, SC, he became the President of Brower, Lowe, and Hall Advertising, building a reputation of honesty and integrity in business until his retirement, after which he channeled his immense passion and talent into painting portraits. During his full and adventurous existence, Ed hiked the Grand Canyon rim to rim and back, built a cabin in the mountains, and enjoyed playing baseball. The incredible life of Papa Ed, as he was known to his family, will be cherished forever in the memories of his wife, Charlotte, and their three children: David, husband of Trudy Brower and father of Devin Brower, and Dr. Cheyna Brower (wife of Aaron Brower); Kenneth, husband of Doris Mingledorff and father of Dr. Adrienne Bruce (wife of Dr. Carl Bruce, mother of great grand-son Nolan Bruce), Danielle Brower-Lingsch (wife of Dr. Brandon Smith), and Adam Brower-Lingsch (husband of Sara Amor); and Beth, wife of Dr. Rod Doble and mother of Roddy Doble (husband of Aileen Doble) and Sara Van Wormer (wife of Curtis Van Wormer); as well as his loving caregiver, Shanel Davis, and a host of devoted cousins, nieces, nephews, and dear friends.

The family of Edward Brower created this Life Tributes page to make it easy to share your memories.

Send flowers to the Brower family.