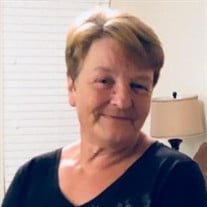 Mrs. Elizabeth Jean Sim Easler, 64, of Simpsonville, SC departed this life on Sunday, October 10, 2021 at Greenville Memorial Hospital. She was born on October 20, 1956, to the late William Sim and Alice Sawyer Sim. She attended school in Corby, England where she grew up. She moved to the United States in 1980. She was a loving Mother and Housemaker. She attended Lowndes Hill Baptist Church many times to see her granddaughters. She was preceded in death by her parents and a granddaughter, Morgan Sim. 1975 is when she would become a Mother, giving birth to her first son, Justin (Lindsay) Sim of Simpsonville, SC; in 1978 she gave birth to her second son, James Easler; and in 1980 her third son, Mark Easler was born, both of Greenville, SC. In 1986 she met the late Mr. Bennie Smith and together they welcomed into this world two daughters; Rachel Smith Brantley of Anderson, SC and Felicia Smith of Greenville, SC. Left to cherish fond memories, other than her children, are her two sisters; Catherine Sim and Diane Sim; one brother, Derek Sim, all of England; thirteen grandchildren; and a host of nieces, nephews, cousins, other relatives and friends she encountered over her years on this earth.

The family of Elizabeth Jean Sim Easler created this Life Tributes page to make it easy to share your memories.

Send flowers to the Easler family.