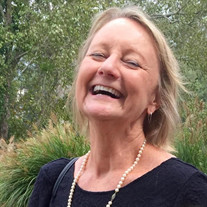 Elizabeth “Libert” Madison King Brown, age 69, passed peacefully in Greenville, South Carolina. A special lady who went out in style on TWOsday, 2/22/22. Libert was born to Mary Elizabeth and Edward William (Bill) King in Kingsport, Tennessee, where she grew up with brother, William, and sister, Mary. Her grandfather, E. Ward King, founded Mason & Dixon Truck Lines, and being a family owned and operated business, the King family was very tight knit, spending much time together - including summers and holidays at “The Shanty” on Boone Lake. She attended Dobyns Bennett High School in Kingsport and graduated from The Graham-Eckes School, a private High School in Palm Beach, Florida. She studied fine arts at St. Andrews College in Laurinburg, North Carolina with study abroad programs in Italy and India. Libert embraced every adventure life handed her with an open heart. She began her career in Towson, Maryland, studying culinary arts and began catering. She then worked as a private chef traveling the world on yachts before settling in Fort Lauderdale, Florida where she opened a retail store and catering business called ‘Foodies’. Libert’s daughter, Emma, would later “bounce” her way off the counter as an infant, prompting Libert to close Foodies and focus on family. Libert developed Clear Glass Systems, a window restoration business, and served as culinary expert at Williams Sonoma. Libert loved hiking, and her favorite spot in Florida was Myakka River State Park. After Emma earned her associates degree, Libert relocated to Greenville, South Carolina where she became involved with Greenville Natural History Association hiking club and served on the board as Vice President. Hiking was a passion, and she averaged 1,000 miles on the trail annually. She became a wildflower and mushroom expert, often heard exclaiming “woohoo!” for a particularly exciting find. In February 2021, Libert was diagnosed with Glioblastoma, an aggressive and incurable form of brain cancer. True to her nature, Libert took on the most challenging and unforgiving cancer with an aggressive spirit! Her daughter, Emma, and son-in-law, Josh, moved in to support her through the journey. In her last days, Libert enjoyed spending time with family and her sweet cats, whom she often preferred. Libert is survived by daughter Emma Imes and husband, Josh; sister Mary Sullivan and husband, Mark; brother William King and partner Stephen Bicknell; nephew Brian Sullivan, his wife, Izzie, and great-niece, Zoe; niece Jordan Sullivan and partner, Kevin Stelling; stepmother, Martha Mather King and a myriad of special cousins, loving friends, and cats. A celebration of life will take place at a later date. In lieu of flowers, the family asks that gifts be made to Florida State Parks Foundation and/or Gliobastoma Foundation.

The family of Elizabeth "Libert" Madison King Brown created this Life Tributes page to make it easy to share your memories.