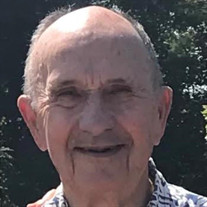 Gale Sumner Roush, 92, of Greenville, South Carolina, passed into Eternal Life on February 27, 2022. He died peacefully at home surrounded by his loving family. He was born to Eber and Dorothy (Sanders) Roush on September 20, 1929 in Manhattan, Kansas. He graduated Valedictorian from Garden City, Kansas High School. Gale received a BS in Mechanical Engineering from Kansas State University and would happily tell all “Every Man a Wildcat”! He also received Bachelor’s and Master’s degrees in Business Administration from the University of Missouri Kansas City. He joined the United States Air Force during the Korean War and went to MIT to become a Meteorologist. He was stationed in St. John’s, Newfoundland, Canada and Thule Air Force Base. He achieved the rank of First Lieutenant. Gale joined Phillips Petroleum Company as a Mechanical Engineer in 1955 where he held a number of positions in Refining and Plastics. His last position was Program Director in the Phillips Research and Development Department. Gale liked to attend musicals, he loved to dance (yes, the swing) and listen to Glenn Miller Orchestra and other Big Band music. Traveling was a passion and going on tours abroad was always fun and interesting. He was an avid crossword puzzle worker, bridge player (self-described as always playing by the seat of his pants), gin rummy player (he always won), and “spider” player on the computer (where he was often a winner, as well). He was quite knowledgeable, and he was a great storyteller. Many of his stories were of his formative years spent on the Kansas plains. Later in life, he had his own “Mr. Fix-It" business and worked part time for 16 years at Home Depot. He is survived by his loving wife of 29 years, Nancy; sister, Edwes Wille of Montana; children Marvelee (Bill) Converse, Pam Klein, Cathy (Dean) Graves, and Matt (Michelle) Roush; stepchildren Liz (Cindy) Oakley and Susan Hedrick, as well as ten grandchildren, Amy Converse, Liz (Scott) Bystrek, Emily (Jared) Peres, Matt (Karina) Graves, Tim Graves, Abby Roush, Blake Hedrick, Branham (Kelsey) Hedrick and Harley Hedrick. He also has three great grandchildren and beloved dog, Sugar. He is preceded in death by his wife of 39 years, Maxine (Lander) Roush and his grandson, Scott Converse. The family would like to thank the devoted caregivers at Regency Southern Care, Rochelle, Terrand, Tasha, Teresa and Julie and his “buddy” Pam Suber. His funeral will be held at St. Peter’s Episcopal Church, Greenville, on March 7, 2022 at 11:00 a.m. Memorials may be made to St. Peter’s Episcopal Church Family Endowment Fund, Greenville or to the Parkinson’s Society of Greenville.

Gale Sumner Roush, 92, of Greenville, South Carolina, passed into Eternal Life on February 27, 2022. He died peacefully at home surrounded by his loving family. He was born to Eber and Dorothy (Sanders) Roush on September 20, 1929 in Manhattan,... View Obituary & Service Information

The family of Gale Sumner Roush created this Life Tributes page to make it easy to share your memories.

Send flowers to the Roush family.