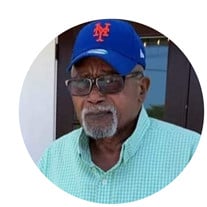 Jake Allen, age 83, of Simpsonville, SC was born June 9th, 1938 in Union Springs, Alabama, to Elijah Allen and Ola Mae (Blackmon) Allen. After the sudden passing of his parents, he was raised by his late uncle K.P. and Minnie (Blackmon) Parker. Jake... View Obituary & Service Information

The family of Jake Allen created this Life Tributes page to make it easy to share your memories.

Send flowers to the Allen family.