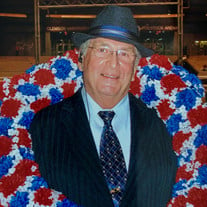 Dr. James (Jim) Russell Gore, 86, passed away on January 13, 2022. Born on September 2, 1935 in Goretown, SC in Horry County, he was the husband of the late Sidney Ann Hickman Gore and son of the late Kermit Bunyan Gore and Florene Graham Gore Whittington of Loris, SC. Dr. Gore graduated from the Citadel and the Medical College of Virginia where he earned his Doctor of Dental Surgery. After graduation, he served as a Captain and a dentist in the Army before opening his dental practice in Greenville, SC in July of 1963. He was a charter member of John Calvin Presbyterian Church and a former member of Dacusville United Methodist Church and was a member of the Greenville Dental Society. Jim was an avid horseman. He loved showing his Tennessee Walking Horses, trail riding with family and friends, and traveling the United States camping and riding horses. He won many blue ribbons and trophies over the years and was inducted into the SC Walking Horse Association’s Hall of Fame and awarded their coveted recognition as Horseman of the Year. He was a long time member of both the North and South Carolina Walking Horse Associations. He and Sid loved traveling to the National Walking Horse Celebration each year in Shelbyville, Tennessee where he enjoyed watching many of the nation’s best walking horses, including some of his own. Jim was also a Mason and a Shriner. In his earlier years, he was an active member of the Hejaz Mounted Horse Patrol. He helped raise money for patients at Shriner’s Hospital where he volunteered his professional services in the dental clinic. He also donated his work and time in local nursing homes and by making mouthguards for Berea High School sports teams. He also served his community through his membership in the Berea Lions Club and Greenville Touchdown Club. Jim was a loving father, grandfather and friend to many. He is survived by three daughters, Doty Herbert (Rob), Dr. Julie Fowler (Jimmy), and Missy Merritt; six grandchildren, Kip Looper (TJ), Lindsey Looper, Trey Fowler (Jennifer), Sidney Ann Fowler, Matt Merritt, and Meredith Brooking (Hunter); and other special ladies we consider family as well, Tina Wrice and Barbara Cunningham, who lovingly and graciously took great care of their “Doc” and “Jim Russell”, “Sid”, and Jim’s mother, “Flo” for many years. In addition to his wife and parents, he was preceded in death by a son, James Russell Gore, Jr. and sister, Sandra G. Jones. A private family service will be held. In lieu of flowers, Memorials may be made to the Alzheimer’s Association, 123 Antrim Drive, Greenville, SC 29607.

Dr. James (Jim) Russell Gore, 86, passed away on January 13, 2022. Born on September 2, 1935 in Goretown, SC in Horry County, he was the husband of the late Sidney Ann Hickman Gore and son of the late Kermit Bunyan Gore and Florene Graham Gore... View Obituary & Service Information

The family of Dr James Russell Gore created this Life Tributes page to make it easy to share your memories.

Send flowers to the Gore family.