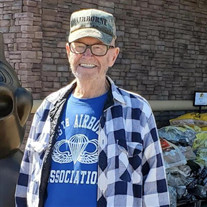 Not sure what to send?

Retired Lieutenant Colonel James W Lowe, 91 passed away peacefully on December 31, 2021, in Anderson, SC. He was born in Williamstown Kentucky to the late Mamie Louis Lowe (mother) and the late James William Lowe(father). He had 4 brothers, Clyde Lowe, Donald Lowe, Frank Lowe, and Richard Lowe, all who preceded him in death. He had 3 sisters, Katherine, who proceeded him in death, and 2 surviving sisters Margret and Barbara Jean. He is also survived by his only son, James W. Lowe and his wife Karla; 3 grandsons and their spouses, Brandon Lawson (Kelli), Travis Lawson (Hannah), Christopher Todd (Allison); 3 great-grandchildren, Kaydence, Lillie, and Ethan; several nieces and nephews; and one very special one Amy Smith. James joined the Army at the age of 17 and proudly served 25 years and retired. He then taught ROTC for another 22 years. He served in the Korean War and did 2 tours in Vietnam. He was a member of the 82nd Airborne 325 infantry regiment. He made over 100 jumps and was awarded several medals before retiring as a Lieutenant Colonel. He loved his military family and stayed in touch with as many of them as possible after his retirement. He was a devoted father, husband, and grandfather. He was a kind and gentle soul, and anyone who knew him loved him and was glad to have been part of his life. He always had a great story to tell, and you never got tired of hearing them. In his retirement, he loved spending time with family and friends, often traveling many miles to see them. He enjoyed spending time at his place in Florida and loved both the warm weather and his friends and family. To know him was to love him, you couldn’t think of him without a smile coming to your face, remembering a story he once told or saying something he always said like “have a good meal and good night’s rest.” He will be truly missed! He will always be remembered!

Retired Lieutenant Colonel James W Lowe, 91 passed away peacefully on December 31, 2021, in Anderson, SC. He was born in Williamstown Kentucky to the late Mamie Louis Lowe (mother) and the late James William Lowe(father). He had 4 brothers,... View Obituary & Service Information

The family of James Winston Lowe created this Life Tributes page to make it easy to share your memories.