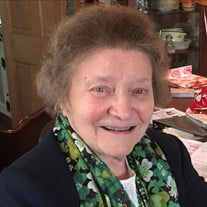 Jane Moore Bolen passed away peacefully on 2/12/2022 at NHC of Greenwood after an extended illness. She was born on 3/17/28 in Montgomery, Pakistan, formerly in the Punjab province of British India, to missionary parents Ralph Erskine Moore, Sr., & Ida (Saville) Moore. After returning to the States at the age of 4, she was raised in Virginia, graduating from E. C. Glass High School in Lynchburg. She then attended Erskine College in Due West, SC where she received her AB in 1948 in chemistry, minoring in music. She furthered her education at Converse College in Spartanburg, SC where she received a Master of Music in Theory/Composition in l970. In l974, she received her Doctor of Philosophy in Musicology from Florida State University, as a recipient of a Delta Kappa Gamma award. In addition, she was Certified in Arts Management from Harvard University. Jane began her career teaching general science and physics in the public schools in Abbeville SC from l948-l949. Her love of music then led her to become a private piano teacher in Abbeville, then later in Greenwood . In l974 she founded and directed the Greenwood Junior Conservatory of Music where she continued her passion for teaching piano that spanned almost 70 years. Many of her Jr. Conservatory piano students achieved distinction in local and state piano competitions. In addition, she also taught at Lander University. Dr. Bolen served as choir director and organist at Greenwood ARP Church as well as choir director at Greenwood First Baptist Church. She was active in the community theater in Abbeville and Greenwood, and served as Executive director of Greenwood Council of Arts from l977-79. Dr. Bolen was a member of Greenwood Music Teachers Association, Greenwood Organists Guild, American Guild of Organists (Greenwood dean 1990-1992), Delta Kappa Gamma, Phi Kappa Lambda, and Delta Omicron. She was an active member in the Charles Colson Prison Ministry at Leath Correctional Institution in Greenwood. Jane was blessed with a long and very full life. In addition to spending time with her family, she enjoyed travel, genealogical research, gourmet cooking, gardening, french hand sewing, and smocking, to name a few. She enjoyed bagpipe study and served as music historian for the The Clan Leslie Society International. “ Whatsoever thy hand findeth to do, do it with thy might” was a family motto that applied to her life in many areas! In addition to her parents, she was predeceased by her brother, Ralph Erskine Moore, Jr, MD of Florence, SC. She is survived by daughters Dr. Nancy Jane Ellis of Kenmore, WA and Dwane Ellis Bolen of Dacula, GA, sister Mary Alice Moore Mitchell of Rock Hill, SC. Grandchildren Anna Bolen Abernathy (Stephen) Buford GA, Taggart Bolen (Maria) Franklin TN, Austin Bolen Dacula, GA, Melanie Bolen Dacula, GA. Great Grandchildren Tripp & Addison Bolen, Lilly, Garrett, Victor Abernathy, and Leo Bolen. The date and time for a Celebration of Life service have yet to be determined. Tributes of remembrance may be gifted to The Alzheimer’s Association.

Jane Moore Bolen passed away peacefully on 2/12/2022 at NHC of Greenwood after an extended illness. She was born on 3/17/28 in Montgomery, Pakistan, formerly in the Punjab province of British India, to missionary parents Ralph Erskine Moore,... View Obituary & Service Information

The family of Jane Moore Bolen created this Life Tributes page to make it easy to share your memories.

Send flowers to the Bolen family.