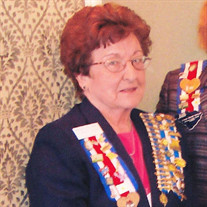 Jeannine Tussey Preston was born in St. Louis, MO 12/24/1928 to George Thomas and Ethel Lee Alice Chappell Tussey, but then grew up in Humphries, MO. She spent the last year of High School in Kansas City, MO, and graduated from William Jewel College in Liberty, MO with a BA in Psychology & Sociology. She did this by working part time at a department store, first in their letter department (an early form of remote shopping) and then as a buyer. Upon graduation she went to work as a secretary in the Insurance firm where she met Joseph A. Preston (died April 29th, 2018) and married him on June 6, 1952. They moved to Cleveland Ohio where Jeannine worked as a secretary before quitting to raise their two children, Alice Jo Preston and Cynthia Lee Preston. They moved back to St. Louis, MO and then to Rockville, MD where both girls graduated from High School. That’s also where Jeannine and Joe caught the genealogy bug. They found their first ancestors the hard way, slogging through Courthouse basements and old grave yards. Sure enough, Jeannine a found Revolutionary soldier ancestor and joined a DAR chapter in Liberty, MO. But that was 4 ½ hours away from her house, so with her friends she founded the Mary Hempstead Lisa Chapter in St. Louis County, MO, becoming the Regent and the Genealogist. At about that time Jeannine and Joe noticed the St. Louis Genealogical Society was very disorganized. So, they got busy organizing, co-running, and growing that Society. After that was going nicely, Jeannine noticed the MO State Archives were lagging behind. So, she and some of her friends organized the Friends of the MO State Archives. They raised money, found a better home for the library, and bought more books for the library. That does not mean she neglected DAR. She became the district director and on top of those duties spent her three years finding speakers for the MODAR State Conference when it was in St. Louis. After that she served as Parliamentarian. Most years she also attended Continental Congress. Jeannine was a member of Daughters of the American Colonists, Colonial Dames of America, Colonial Dames 17th Century (MO State President), Daughters of the War of 1812, Descendants of Washington’s Army at Valley Forge, and more. In 1999, she and Joe moved to Greer, South Carolina to be by daughter Cynthia. There she was an active member of Nathanael Greene Chapter, being registrar for a decade and a half. She is survived by her daughter Alice Preston (along with her husband Dr. Ken Fields, their son Dr. Alex Fields and wife Dr. Nadia Litterman, with children Hugo Litterman Fields and Simon Robert Fields, and their daughter Betsy Fields Smith, with her husband Sergeant Daniel Smith and daughter Susannah Jo Smith) and her daughter Cynthia Preston Schillizzi (along with her husband Dr. William Schillizzi, son Joseph Salvatore Schillizzi, JD and partner Jessica Pittman, son Beck Preston Schillizzi with husband Dr. Aiden Payne and daughter Lyra Payne Schillizzi, and son Daniel and fiancée Alexis Nystrom).

Jeannine Tussey Preston was born in St. Louis, MO 12/24/1928 to George Thomas and Ethel Lee Alice Chappell Tussey, but then grew up in Humphries, MO. She spent the last year of High School in Kansas City, MO, and graduated from William Jewel... View Obituary & Service Information

The family of Jeannine Tussey Preston created this Life Tributes page to make it easy to share your memories.

Send flowers to the Preston family.