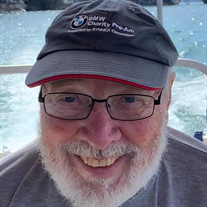 John William Gardner, Jr. , 78, of Greenville, S.C. died peacefully at home on 1/17/2022, surrounded by his beloved family. He was born on August 11, 1943 in Salisbury NC. John grew up with a large extended family of many aunts and uncles, and was especially close with his grandmother, Callie May Thomas. He enjoyed a successful sales career at Schering Plough, eventually becoming the Vice President of Sales and Marketing for their health and beauty aids division, selling Coppertone, Maybelline and Dr. Scholl’s products, followed by similar positions in several other companies. He then enjoyed a second career as a Casino Dealer before moving to South Carolina to be closer to his grandchildren. While he lived most of his life in the Southeast, he lived briefly in Alaska with his daughter Amy and her family before they settled once again in Greenville, S.C. He spent the rest of his years with his family and enjoyed traveling. Each summer they would map out a 3 to 4 week RV trip working to achieve his goal to visit each of the United States, completing this in 2019. John was predeceased by his wife, Wanda Coleman Gardner in 2016 after being married for 43 years. He is survived by his brother, Gary Gardner; his daughters, Wendy Murphy and Amy Gardner; and his grandchildren, Andrew Murphy, Daniel Gardner, Callie Gardner, and Caleb Gardner. His interests were many, but he will be remembered by his family for his love of crosswords, uncanny ability to answer all the Jeopardy trivia questions, and a wit so dry you weren’t quite sure if he was kidding or serious. He was always quick to tell a joke and, like all salesmen, could regale you with a good story or two. The family will host a celebration of life at 12:30 pm on Sunday, January 23, 2022, at Westville Funeral Home, 6010 White Horse Road, Greenville SC 29611.

John William Gardner, Jr. , 78, of Greenville, S.C. died peacefully at home on 1/17/2022, surrounded by his beloved family. He was born on August 11, 1943 in Salisbury NC. John grew up with a large extended family of many aunts and uncles, and... View Obituary & Service Information

The family of John William Gardner Jr. created this Life Tributes page to make it easy to share your memories.

Send flowers to the Gardner family.