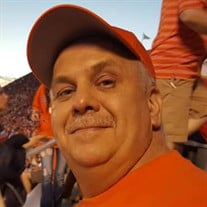 It is with extremely heavy hearts that we announce the unexpected passing of John Michael Rebish, on August 11, 2021, at age 52. John was a much-loved husband, son, brother, uncle, nephew, cousin, and friend. He passed from this life into the presence of his Heavenly Father and the Savior and Lord that he loved. He will be sorely and truly missed by his wife, Holly, and family that loved him dearly. John was a very loving genuine soul and kind-hearted individual of great faith who loved the simple things in life. He was a graduate of Frazier High School, Perryopolis, Pa, with the class of 1987. Upon graduation, he moved to South Carolina and soon became a resident of Easley, SC. John was currently working as a warehouse/distribution manager of Smith Dray Line/Atlas Van Line where he was a loyal and trusted employee for well over 25 years. His hard work and dedication to successfully getting a job done efficiently were second to none. John was a faithful member of 5 Point Church which gave him direction and joy. It was there that he learned how to find peace. John’s free time was often spent helping others with one task or another. He was so caring for people and animals. He loved his fur babies; Buddy, Blue, Jewels, Roscoe, Scrappy, and Bella. John was soft-spoken and was more apt to listen than speak, but his expressions usually said it all, and then his smile would light up the room. He really tried to make this world a better place. John was an avid sports fan which was obvious to those who knew him. His beloved Steelers decorated every wall of REBE’S Place where he would nervously watch the games and smile broadly when they won. John enjoyed camping and was an accomplished fisherman who had some trophy catches that he was very proud of, though he would not say it. But his eyes would be beaming as he held up the fish. And although he lived most of his adult life in Easley, he loved coming home to Perryopolis, Pa to be among his family and old friends. John was born on November 24, 1968, the youngest son of Martin and Dorothy (Statzula) Rebish. Preceded in death by his parents and grandparents, Peter and Julia Statzula and John and Mary Rebish, and his brother-in-law Stanley (Scott) Cooley. Surviving to keep his memory alive is his wife, Holly (Lehman) Rebish, whom he married on October 12, 1996, and in-laws Hettie and Tom Lehman of Pickens, SC, his siblings; Marty Rebish of North Canton, OH, Bob (Henrietta) Rebish of Smithton, Pa, Linda (Lorraine) Rebish of Cannonsburg, Pa, Ava Cooley of Taylors, SC, Vicki (Nick) Muccioli of Perryopolis, Pa and his brother-in-law Todd (Stephanie) Lehman of Goshen, IN and sister-in-law Heidi (Ivan) Watson of Maple Falls, WA. His aunts and uncles; Paulette-Patty (Robert) Pavlovich, Andrea (Ronald) Moreschi, Eustene-Penny (Jacob) Oberly, Larry (Sue) Lehman, and Lynn Beck. His nieces and nephews, Eric Rebish, Angela VanDorsten, Marty (Missy) Rebish, Leah (Evan) Eich, Jamie Muccioli, Hunter Cooley, Vincenzo Muccioli, Anthony Muccioli, Bralyn (Kyle) Oberlin, Josh (Sidney) Lehman, Kathryn Watson, Jason Watson, and Jeremiah Watson. His great-nieces and nephews, Gavin, Ayden, Addison, Andrew, Mackson, Madyx, JP, Austin, and numerous special cousins and friends. Although we mourn our sudden loss of John, we find comfort in the knowledge that he is with the Lord and at peace. Spend time and cherish each moment with the ones you love. Forever in our hearts, John, We love you! Please join us for a memorial service and celebration of John’s life on September 19, 2021, at 3:00 PM at 5 Point Church, 1039 S. Pendleton St. Easley, SC 29642. In lieu of flowers, contributions can be made in memory of John to your local rescue or humane society.

It is with extremely heavy hearts that we announce the unexpected passing of John Michael Rebish, on August 11, 2021, at age 52. John was a much-loved husband, son, brother, uncle, nephew, cousin, and friend. He passed from this life into the... View Obituary & Service Information

The family of John Michael Rebish created this Life Tributes page to make it easy to share your memories.

It is with extremely heavy hearts that we announce the unexpected...

Send flowers to the Rebish family.