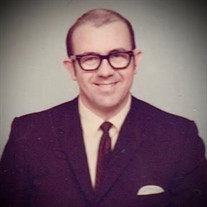 Spartanburg, SC – John Louis Tate, 85, of Spartanburg, SC, died March 31, 2022. Born August 9, 1936, in Burlington, NC, he was the son of the late Arthur P. Tate and Lucille Lanning Tate. He was predeceased by his beloved wife of 58 years, Ina Kay King Tate. Dr. Tate earned a BS in chemistry from Wofford College where he was a member of the varsity football team and Alpha Sigma Phi Fraternity. Following graduation in 1958, he attended the Medical College of Virginia School of Dentistry in Richmond, Virginia. After graduation, he worked at the VA Hospital in Richmond, before entering the US Air Force. He was stationed at the Charleston Air Force Base in Charleston, SC. Following his military service, he returned to Spartanburg and opened his dentistry practice. As a long-time member of St. John’s Lutheran Church, Dr. Tate was a member of the choir, Sunday School teacher, and lay leader. He was also a member of the downtown Sertoma club. Survivors include his daughters, Lucinda T. Allen (Terry) and their sons, Trabert and Wells; Kimberly T. Smythe (Pemberton) and sons, Walker and Will; Marianne T. Acevedo (Armando) and their daughter, Natalie; and Alecia T. Compton and her daughters, Darcy, Chloe, and Mary Grace; brother, James E. Tate (Frances); and sister, Jean Arthur Davis (Wilson). A celebration of life will be held at a later date.

The family of John Louis Tate created this Life Tributes page to make it easy to share your memories.

Send flowers to the Tate family.