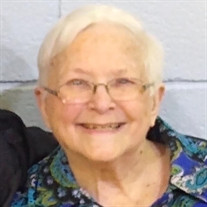 Margaret “Peg” Van Skike Moffett March 17, 1931 – March 11, 2022 Margaret “Peg” Van Skike Moffett, age 90, of Taylors, South Carolina, went to be with her Lord in the early morning on Friday, March 11, 2022. A memorial service will be conducted on Saturday, March 19th at 11:00 am (with visitation prior to the service) at her home church, Taylors First Baptist Church. Peg was born and raised in Bradenton, FL. She graduated from Manatee High School and later attended Florida State University where she was a member of Phi Mu sorority. In 1952, she left FSU and became a stewardess (what they were called back in the day) with National Airlines, based in Jacksonville, FL. Peg loved being a stewardess: meeting new people from interesting places, assisting her passengers and flying to exotic places such as Havana, Cuba. In February 1953, while still a stewardess, Peg went on a blind date (a Dean Martin and Jerry Lewis movie) with the man whom she would later marry in April 1954, Richard (Dick) Gilbert Moffett, Jr. Peg quit the airlines, became an elementary school teacher and then a stay-at-home mom when they started raising a family in 1956. Dick recruited Peg into becoming a Florida Gator football fan – they spent many a fall weekend traveling to see the Gators play. She and Dick hosted numerous Florida-Georgia parties. Their bathroom in the “Big Room” was decorated with all manner of Gator memorabilia. They even named one of their cats after a Gator football coach – Galen Hall Moffett. The family did have some non-football vacations – the beach, summers at her parents’ home in Bradenton, and the mountains of North Carolina. When her husband began to suffer from Alzheimer’s disease, Peg cared for him at home as long as she could. After he passed, Peg eventually moved to Taylors, SC, with her daughter, son-in-law, and their sons. She dearly loved her family: son and daughter-in-law, daughter and son-in-law, grandchildren, great-granddaughters, and numerous nephews and nieces. While in South Carolina, Peg became an active member of Taylors First Baptist. She greatly enjoyed her Sunday school class, the XYZ Fellowship group and the many loving people who befriended her. At Taylors, Peg was well known for her notes of encouragement to those in need. Having placed her trust and faith in Jesus Christ, Peg did not fear death. She lived with the strong conviction and confidence that, upon her passing, she would enjoy real life with a new body and a restored mind in her heavenly home. Peg was preceded in death by her parents (Robert Bruce Van Skike, Sr. and Ethel Byrd Van Skike) and her husband Dick. She is survived by her children, Richard Gilbert Moffett III (Beverly) of Murfreesboro, TN, and Melanie Stiles (Louis) of Taylors, SC; a brother, Robert Bruce Van Skike, Jr. of Sarasota, FL; grandsons, Jacob Stiles, Matthew Stiles and Rick Stiles of Taylors, SC; granddaughter Jennifer White of Winter Park, FL; and great-granddaughters Walker Legler and Gracie Legler of Winter Park, FL. We would like to express our heartfelt appreciation to all the folks at Spartanburg Regional Home Hospice for their wonderfully compassionate care and support of Peg and her family during the last three months of her life. May Peg’s memory be a blessing to her family and friends.

The family of Margaret "Peg" Van Skike Moffett created this Life Tributes page to make it easy to share your memories.