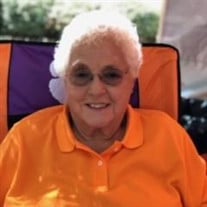 Dr. Margaret Louise Wyatt, died peacefully at her home while surrounded by her loved ones, on Thursday, February 17, 2022. A Greenville native, Dr. Wyatt was born April 8, 1935, the daughter of Dr. Charles Newton Wyatt and Louise Patjens Wyatt. After graduating from Greenville Senior High School in 1953, she earned a bachelor's degree from the College of William And Mary in 1957. Dr. Wyatt was extremely proud to follow her father into the medical profession by earning an M.D. at the Medical University of South Carolina. During all four years, Dr. Wyatt served as the secretary-treasurer of her class and when she graduated in the top 10% of the Class of 1961, she was one of three females to do so. Dr. Wyatt began her medical career with an internship at the University of Virginia Hospital in Charlottesville and followed this with a pediatric residency and a pediatrics fellowship at the University of North Carolina Hospital Chapel Hill. Discovering her love of the pediatrics field, Dr. Wyatt returned to the Greenville area in 1965 and opened her private, solo practice. This practice became her life's work. For the next 49 years, Dr. Wyatt considered it an honor and privilege to care for thousands of patients who decided to make “Dr. Margaret” their physician. Throughout her professional career, Dr. Wyatt received numerous honors and recognitions for her work including her inclusion in the 1966 edition of Outstanding Young Women of America, her receiving the 2007 Greenville Health System Pediatrician of the Year Award, and the 2012 March of Dimes Excellence in Medicine Award. Known to her family and friends as “Marcar,” Dr. Wyatt closed her practice in 2014 and was thanked for her years of service to the children of South Carolina by the South Carolina State Senate. She spent her retirement years with her beloved family, visiting with her neighbors in the Swansgate community, and doting on Gus, her shih tzu whom she took everywhere. Dr. Wyatt loved nothing more than running into her former patients and catching up with them. In addition to her parents, she was predeceased by Charles “Geech” Wyatt, her brother and Charles Wood, her nephew. She is survived by her sister, Merry Mulcahy Joe); her sister-in-law, Carolyn Wyatt; her nieces, Maggie Boliek (Mike), Tracy Paladino (Steve), Louise Fletcher (Billy), and Cathy Wyatt; nephew David Wood (Suzanne); and her “grands” – Wynne, Wyatt (Paul), and Luke Boliek; Ryan and Michael Paladino; McKenzie and Walker Fletcher; and Ashley Migliazzo (Loren). Keeping the health of those she loved and cared for in mind, a private service will be held at 11:00 am on Saturday, February 26, and will be live-streamed from the Trinity Lutheran Church website followed by a public visitation at Trinity Lutheran Church, where she was a longtime member, on Saturday, February 26, 2022, from 1-3 PM. In lieu of flowers, donations can be made to Trinity Lutheran Church or the Greenville County Humane Society.

The family of Dr Margaret Louise Wyatt created this Life Tributes page to make it easy to share your memories.

Dr. Margaret Louise Wyatt, died peacefully at her home while...

Send flowers to the Wyatt family.