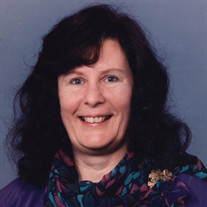 Marilyn Satterfield (nee: Lagedrost; Evans) of Greenville, SC, after an extended illness and hospice care for the past several months, passed peacefully at home on the morning of Friday, October 22nd with her husband Charles Satterfield at her... View Obituary & Service Information

The family of Marilyn Jean Satterfield created this Life Tributes page to make it easy to share your memories.

Send flowers to the Satterfield family.