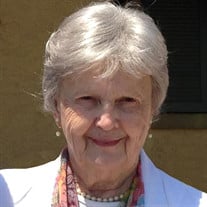 Marilyn Meils Thompson was born April 12, 1928 to Wesley and Edna Meils in Wisconsin Rapids, WI. Wesley eventually moved his family from Wisconsin to Illinois and finally, to Idaho where Marilyn and her three sisters were quickly put to work clearing rocks off the land that they homesteaded. After high school graduation, Marilyn worked as the school secretary, then moved to Alaska with her sisters. In Alaska, she became an airline stewardess and met her future husband, Air Force Captain Kermit Thompson. They married in the territory of Alaska. In the early 60’s, Marilyn was invited to attend Bible studies with a friend and put her faith in Jesus Christ and began her Christian walk. Kermit’s last tour of duty was in Hawaii. Upon his retirement from the Air Force there, both he and Marilyn served faithfully at Hanalani Schools, a private Christian school, on Oahu. They eventually left Hawaii and moved near their sons in Greenville, SC and joined Mt. Calvary Baptist Church, a church they greatly loved. Marilyn continued to faithfully minister to her husband when he suffered a stroke that rendered him bedridden. Upon Kermit’s passing last year, Marilyn lived with family and then moved to Shepherd’s Care. This Spring, her health declined and Marilyn went Home to be with her Savior on August 24, 2021 at 6:20PM. She is survived by her two sons and families: Del & Kathleen, children Brenna and Scott (Katherine); Dana and Rayvena, children Ethan and Suzanna. Marilyn is greatly missed and dearly loved by her family, church family and friends! In lieu of flowers, contributions can be made to any of the following organizations: Bob Jones University (1700 Wade Hampton Blvd, Greenville, SC 29614); Gospel Fellowship Association (1809 Wade Hampton Blvd, Suite 110, Greenville, SC 29609); and Mount Calvary Baptist Church (115 Cedar Lane Road, Greenville, SC 29601).

Marilyn Meils Thompson was born April 12, 1928 to Wesley and Edna Meils in Wisconsin Rapids, WI. Wesley eventually moved his family from Wisconsin to Illinois and finally, to Idaho where Marilyn and her three sisters were quickly put to work... View Obituary & Service Information

The family of Marilyn M. Thompson created this Life Tributes page to make it easy to share your memories.

Customized sympathy cards. Mailed for you.