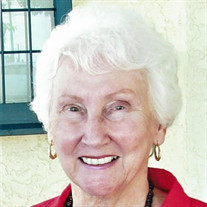 On December 10, 2021, Phyllis Hope (Kitchen) Anderson left this old world behind and moved into the new home Jesus said he had gone on before to prepare so that where He is she could be there also. Phyllis was born on November 28, 1930, in Logan, West Virginia to the late Martin T. Kitchen, Sr. and Glee Hope (Perry) Kitchen. For twenty years Phyllis was an active officer of The Salvation Army becoming Major Phyllis Anderson. In 1973, Phyllis and her husband moved to Greenville, SC and she went to work with the Urban Ministries which was an outreach program of several local United Methodist Churches in Greenville County. Phyllis became the director of the Congregate Dining Program which was funded by a grant to the Urban Ministries from the South Carolina Commission on Aging. The program provided lunch and a daily program to the elderly throughout Greenville, Easley, Pickens, and Oconee Counties. After operating her own childcare center for a few years Phyllis went to work with The Salvation Army as a Service Unit Director for Easley, Pickens, and Oconee Counties. After retiring, Phyllis was active with the State Department of Mental Health and was certified for their Home Share program. For several years Phyllis and her husband worked with both men and women as they transitioned from the hospital on Bull Street in Columbia to their own apartment. Phyllis then teamed up with the Blair Foundation and opened her home to provide foster care for over a dozen girls. Phyllis is survived by her husband, H. Ben Anderson, whom she married on June 7, 1949, in Huntington, WV. Last June they celebrated their 72nd anniversary. Preceded in death are four brothers: Martin T. Kitchen, Jr, Klon K. Kitchen, and Raymond W. Kitchen. Four sisters also preceded Phyllis in death: G. Marie Kitchen, Virginia E. Carey, Lilian Tiller, and Minnie B. Smith. Surviving are a brother, Robert B. Kitchen, and a sister, G. Frances Hines. Phyllis is also preceded in death by three sons: Hilary Bryan Anderson, Howard Bernard Anderson and Harlan Bradley Anderson, Surviving are Four sons: Harmon Benjamin Anderson III of Simpsonville, SC, Harold Boyd Anderson of Greenville, SC, Harvey Bruce Anderson of Irmo, SC and Hollis Barry Anderson of Williamson, SC. Scattered across the United States are 16 surviving grandchildren, 27 surviving Great Grandchildren and 4 Great Great Grandchildren. On Sunday January 9, 2022, there will be a celebration of life for Phyllis at The Salvation Army Kroc Center located at 424 Westfield Street Greenville, SC 29601. Following a 3:00 service in the chapel everyone is invited to join the family in the conference center for refreshments and fellowship.

On December 10, 2021, Phyllis Hope (Kitchen) Anderson left this old world behind and moved into the new home Jesus said he had gone on before to prepare so that where He is she could be there also. Phyllis was born on November 28, 1930, in Logan,... View Obituary & Service Information

The family of Phyllis Hope Kitchen Anderson created this Life Tributes page to make it easy to share your memories.