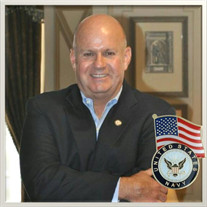 Pressley Cavin Stutts, Jr. passed away on Thursday, August 19th, 2021 in Greenville, South Carolina. Born on February 3rd, 1957, in Flint, Michigan, he was the son of late Pressley Cavin Stutts, Sr., and Katherine Stutts. Pressley is survived by his loving wife Patty Stutts, his sons Pressley Stutts III (grandsons Cavin and Linc) of North Carolina; Bart Stutts of North Carolina; his sisters, Julie Schmidt (Dave) of North Carolina, and Beth Ann Stutts of Michigan; brother Tim Stutts of Michigan; stepbrother Larry Stutts (Marty) of South Carolina; stepbrother Brian Springs of North Carolina; half-sister Becky Stutts of South Carolina; and half-brother Scott Stutts of Michigan. Pressley is also leaving behind his stepchildren: Jon Chance of Greenville; Angie (Chris) Pryor of Greenville; Ryan Ross of Greenville; and step-grandchildren Hannah Jordan, Alex Jordan, and Ian Chance. During his childhood spent in Durand, Michigan, Pressley was awarded the prestigious Eagle Scout award. He moved to North Carolina in his teen years. He received his Bachelor’s degree in religion and philosophy from Gardner-Webb University and his Masters's of Divinity in Theology from Southwestern Baptist Theological Seminary. While in graduate school, Pressley first delved into entrepreneurism, developing his vision of the unique opportunities that business ownership provided for those who had a dream, a strong work ethic, and a desire to help others. That vision would guide many future endeavors. After graduate school, Pressley joined the U.S. Navy. By the age of 23, Pressley was a chaplain and spent over 30 years in a distinguished service career. His travels with the military took him to Japan, Turkey, Iraq, Canada, and Mexico. For 22 of those years, he was attached to and proudly served with, the United States Marine Corps. He actively served during Operation Desert Storm in 1990-91, and again during Operation Iraqi Freedom in 2005. In 2011, Pressley retired as a Commander from the United States Navy Reserve. Always blessed with a limitless supply of energy, Pressley leveraged his early passion for business development on multiple fronts. He worked for a number of colleges and nonprofits in fundraising, and also volunteered his time to the Boards of many other organizations with values he shared. Along the way, he also opened restaurants, worked in the insurance industry, and counseled businesses on branding. His network of friends was always growing. In recent years, Pressley had become a high-profile political figure in South Carolina, beginning in 2017 when he took the helm and revitalized the Greenville TEA Party. With his affable manner and unwavering commitment to American values, Pressley became a go-to media source for conservative viewpoints. He was featured on countless local and national radio and tv segments, including FOX & Friends and Steve Bannon’s War Room: Pandemic. When asked, Pressley stepped up and accepted the reins of the South Carolina Tea Party Coalition Convention which Pressley rebranded as Rock the Red USA, a large multi-day conservative symposium for the Southeast. With his impressive network of influencers, he was able to feature General Michael Flynn, Lin Wood, Ambassador Hank Cooper, Thomas Homan, Tracy Beanz, John Di Lemme, K. Carl Smith, Trevor Loudon, Alfie Oakes, Erik Cocoran, Chad Caton, Senator Ted Harvey and many other thought leaders at this year’s event. Always the avid patriot and defender of freedom, Pressley was recently elected to serve the Greenville County Republican Party, first as its 5th Vice-Chair in charge of events, and later as the GCGOP State Executive Committeeman representing all of Greenville County on the state executive committee. When Pressley was not organizing events or advocating on someone’s behalf, he loved spending time with his family, his beloved grandsons Cavin & Linc, and his canine sidekick Pippi. Pressley was a Christian, a U.S. Navy chaplain, a husband, a father, a friend, and a man of unwavering faith. He always calmly but firmly conveyed his beliefs, even in the face of greatly advantaged opponents, censorship, media bias, and cultural war . . . he was a brave patriot through and through. We must take inspiration from the faith and determination he exhibited, no matter the circumstances. Pressley’s memorial service will be at Burnsview Baptist Church in Greer, South Carolina, on Friday, September 10, 2021, at 2:00 p.m. All friends and family are welcome to attend the service, with fellowship and light refreshments to immediately follow. In lieu of flowers, memorials may be made in Pressley’s honor to Rock the Red USA Foundation (www.RocktheRedUSA.com) at P.O. Box 24216, Greenville, SC, 29616

The family of Pressley Cavin Stutts Jr. created this Life Tributes page to make it easy to share your memories.

Send flowers to the Stutts family.