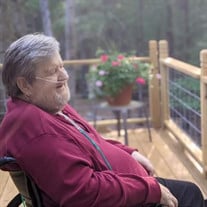 The beloved Reverend Barry Lane Yates, 68 years young, passed away on September 1, 2021. Barry was born March 18, 1953, in Greenville, S.C. to the late Tessie Mae Click Yates of Del Rio, Tennessee. Barry served in the Armed Forces during the Vietnam conflict. He was lovingly known as “The Bible Man,” for his evangelism and Bible ministry, in which he gave away Bibles all over the Southeastern United States. He will be remembered for his charitable contributions and love for others. His ministry was based on love, compassion, and tender mercies. His favorite places included Shenandoah National Park, the Blue Ridge Parkway, and the homes of loved ones and friends. Barry is survived by his wife of 44 years, Wanda; mother and father-in-law, Geneva Hart and the late Melvin Hart; sister-in-law Reda Bailey (Ken); two children, Etta Marie Johnson (Ryan) and Jennifer Tess Cooper (Aaron); seven siblings, Gertie Carrol (Jerry), Evelyn Yates, Dorothy Feld (Charlie), James Yates (Faye), Peggy Davis (Milton), Donald Yates (Barbara), and Ronald Yates (Hazel); five grandchildren, Emily Farr, Zackery Cooper, Noah Cooper, Jeremiah Johnson, and Erynn Cooper; two furry children, Rocky and Roxy, as well as a best friend, Terry “Scooter” Williams. A celebration of life will memorial service on Saturday, October 23rd at 3:00pm at 4173 Jordan Road, Greer, SC 29651. In lieu of flowers, contributions in Barry’s memory may be made to Cleveland Church of God at 7 Church of God Circle, Cleveland, SC 29635. The family thanks you all for your many prayers and well wishes during our time of bereavement.

The family of Reverend Barry Lane Yates created this Life Tributes page to make it easy to share your memories.

Send flowers to the Yates family.