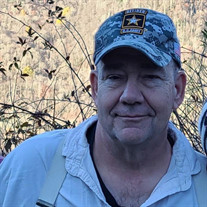 Richard Anthony Bohland, 60, of Cross hill, SC passed away recently in his home. Survived by his wife of thirty six years, Kelly Bohland, his children; Megan, Stephanie, Francis, Richie, Lexy, Devin and Ben as well as his grandchildren, Olivia and Natilia. His father, Richard H. Bohland, his mother, Helen Bohland, brother Leo Bohland, and his two sisters, Paula Bohland and Mary Wendland, as well as all their families, also mourn him. Born in Cleveland Ohio and raised in Detroit Michigan, Richard moved to Southport NC with his mom and siblings during his high school years. He attended Campbell University and then moved to Chapel Hill, NC where he met his best friend and wife, Kelly Stout Bohland. The summer before his senior year of high school Richard enlisted in the NC National Guard and served twenty one years between that and the Army Reserve. He was deployed several times and served Desert Storm, the Honduras, and several tours within the US. In civilian life he worked many jobs. Most recently managing sales director of GUSTO Seafood in Greer, SC. Upon retiring, he joined his wife as a partner in her business, Attack Accounting Tax Services in Greenwood, SC. He was an avid history buff and enjoyed reenacting famous battles. His artillery unit, The Columbia Flying Artillery was most recently and notably invited to participate in the 150th reenactment of the Battle of Gettysburg, PA. He was a wonderful husband and father and prayed daily for the continued ability to be so. He had an extraordinary work ethic and passed that onto his children. He took pride in teaching them to serve others as he had; service to his God, his country and his family. He is dearly loved and will be sorely missed.

The family of Richard Anthony Bohland created this Life Tributes page to make it easy to share your memories.

Send flowers to the Bohland family.