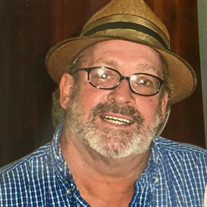 Rick was born August 17, 1957 to Loretta (Lori) and Richard (Dick) Smith in Sacramento, California. He was their oldest son along with a brother Michael (dec), sister Nancy (dec), and sister Kim. He grew up in Lawrence, Indiana and moved to Florida in his early 20s. Rick had a strong entrepreneurial spirit and he launched several businesses during his life. His early work in construction led him to form a tile installation company and later, a small manufacturing company specializing in concrete moldings. Rick was a formidable deal-maker, very resilient and could navigate almost any business challenge. While living in Florida he enjoyed fishing, boating, sailing and had a love for restoring hot rods. In 2009 Rick and his wife, Angela Chappelear, moved to Greenville, South Carolina where he developed Uncle Mike’s Junktiques, a resale and online market featuring jewelry and early American antiques. For more than 10 years, Rick and Angie were loving and devoted caregivers to Lori Smith (dec), Rick’s mother, and provided for her needs. They made it possible for her to spend her later years living at home. Throughout his life Rick also kept close family ties with his step-mother, Brenda, and helped her complete a memorial sailing journey aboard Wynken in honor of his father. In Greenville, Rick and Angie maintained the hub of the Smith family meeting place and hosted many wonderful reunions over the years. Their home was always a welcome place where they showed warmth, hospitality and friendship to all, including many of the four-legged variety. Rick loved dogs. Rick truly had a generous and caring heart. Even as his health declined in recent years, he sought to find ways to provide encouragement and help to others, and to appreciate family. Rick is the father of Rik Smith who lives in Indianapolis with his wife Elaine, along with Rick’s grandchildren, Isaac and Asa. Rick also has a son, Tyler, and four nieces and nephews. He was always thrilled to see or hear from them. Rick’s recent years were challenging. In early 2021, he was in the hospital ICU for four months, but was finally able to return home in the late summer. The extended Smith family is grateful to the extraordinary healthcare community in Greenville and especially for Angie’s devoted care which made it possible for him to enjoy his new home and be with family for the 2021 holiday season. We will all miss Rick. He showed us a depth of creativity and courage to get through almost any situation while staying positive. He took the time to care about the people around him. We plan to honor his legacy at a family gathering in Florida later in 2022. For those who wish to provide memorials, please consider supporting the hospital: St. Francis Downtown, 1 St. Francis Drive, Greenville, SC 29601.

Rick was born August 17, 1957 to Loretta (Lori) and Richard (Dick) Smith in Sacramento, California. He was their oldest son along with a brother Michael (dec), sister Nancy (dec), and sister Kim. He grew up in Lawrence, Indiana and moved to... View Obituary & Service Information

The family of Richard "Rick" Phillip Smith Jr. created this Life Tributes page to make it easy to share your memories.

Send flowers to the Smith family.