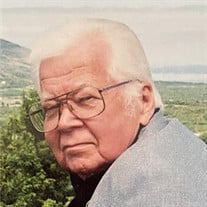 Dr. Richard Olof Sorensen, 86, widower of Joan Sorensen, passed away on April 6, 2022 at the Woodlands at Furman in Greenville, SC. Olof was born July 22, 1932, in Hazen, North Dakota. He was the son of the late Ray and Rosalind Sorensen of North Dakota. Dr. Richard Olof Sorensen, Professor of Art Emeritus received his Undergraduate Degree from the Minneapolis School of Art, an MFA in painting from Pratt Institute, and a Ph.D. in Comparative Arts from Ohio University. After teaching in the Baltimore County Public School System, he went on to act as the Head of the Art Department at Ursinus College and then dedicated the last 29 years of his career as Professor and Chair (1977-83, 1989-94) of the Art Department at Furman University until his retirement in 2003. During this time, he championed the ideal of a liberal arts education and played a significant role in attracting the funds and helping with the design of the Thomas Anderson Roe Art Building on the Furman Campus. A beloved professor, Olof spent his life dedicated to the arts and lived life according to his motto “everything in excess, nothing in moderation.” His passions were centered around teaching, studying, traveling, and creating. He was an active member of the Southern Graphics Council and Southeastern College Art Conference. His academic works include numerous publications and papers and his works of art can be found in several regional museums and private collections. As a lifelong learner, accomplished pianist, and Educator, Olof had a passion for travel, languages, the symphony, and fine food. Survivors include one son, Trygve Sorensen, and wife, Janet; Three Grandchildren, Connor, Hannah, and Christopher; one sister, Donna Seibel, and husband, Jack; one brother, Wayne Sorensen, and wife Francine. In addition to his wife and parents, he is preceded in death by a brother, Darrell Sorensen. A gathering of family and friends will be held from 2-4 pm on Saturday, April 16 in the Camillia Room at the Woodlands at Furman.

Dr. Richard Olof Sorensen, 86, widower of Joan Sorensen, passed away on April 6, 2022 at the Woodlands at Furman in Greenville, SC. Olof was born July 22, 1932, in Hazen, North Dakota. He was the son of the late Ray and Rosalind Sorensen of... View Obituary & Service Information

The family of Dr Richard Olof Sorensen created this Life Tributes page to make it easy to share your memories.

Send flowers to the Sorensen family.