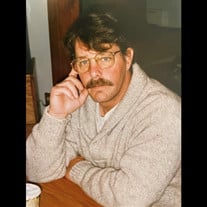 Robert "Bob" James Dougherty Born March 31, 1954 in Philadelphia, PA passed away on August 21, 2021 in Simpsonville, SC. At the time of his passing, he was in the company of his daughter, Sereen Alise Aiken, his son-in-law, Michael Aiken, his two grandsons Ethan and Zachary Fowler, and the hospice care team at the McCall Hospice House. Bob's passion was bringing laughter and joy to all that he met. All day. Every day. He never met a stranger and had a multitude of jokes to tell for any occasion. He adored his family immensely! He enjoyed spending all of his time in the outdoors setting. Bob truly enjoyed camping, hunting, fishing, boating and riding his motorcycles. Bob enjoyed the simple pleasures of life such as sitting on the back patio and listening to the birds in the morning time while sipping on his coffee and petting his dogs. He served his country in the United States Marine Corps from 1972-1976. He believed in God, his family and his country’s freedom. Bob was the son of Marion Dougherty and William Dougherty. Bob held a career as a Cellular Communications Technician from the early 1980's until 2017. He is survived by his daughter, Sereen Alise Aiken of Mauldin, SC, and three sons Sean Dougherty of Hollsopple, PA, Ryan Dougherty of Stratford, NJ and Eric Dougherty of Haddin Heights, NJ. Bob has 5 grandsons and 6 granddaughters. He is also survived by his brothers Steven Dougherty of Glen Mills, PA and James Dougherty of Broomall, PA, and sisters Christine Dougherty Wilson of Drexel Hill, PA, Karen Cain of Centreville, VA, and Denise Pomilio of Media, PA. A Celebration of Life will be held in the near future with dear friends and family in SC.

Robert "Bob" James Dougherty Born March 31, 1954 in Philadelphia, PA passed away on August 21, 2021 in Simpsonville, SC. At the time of his passing, he was in the company of his daughter, Sereen Alise Aiken, his son-in-law, Michael Aiken, his... View Obituary & Service Information

The family of Robert “Bob” James Dougherty created this Life Tributes page to make it easy to share your memories.

Send flowers to the Dougherty family.