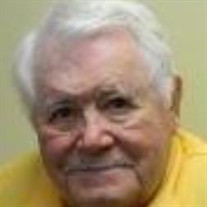 Rolland Ray Christen (Chris), age 94, of Greenville, SC died peacefully on Jan 17, 2022, of natural causes. Born in Grover Hill, Ohio in 1927, he spent most of his youth in Payne, Ohio where he worked on his family farm until, as a member of the Greatest Generation, he enlisted in the Navy to serve in the Pacific. He was honored to be asked to participate in the dedication of the World War II memorial as a member of the Honor Flight in 2010. He started his career as an engineer in Michigan in 1948, retiring from Cadillac Gage in 1973. He professionally trained and showed dogs for the AKC, winning first place in the Sporting Division and second nationally with his German Shorthair Pointer, Joker. In 1973, he married the love of his life, Paulene Smith, and they would spend 25 years together until her death in 1999. They loved to entertain at their home on Lake Murray in Chapin, SC and treasured their time living and working in Singapore. As a retiree he was involved in several small businesses, was an avid outdoorsman, and loved riding motorcycles with his local Gold Wing Road Riders Association. He moved to Greenville, SC in 2018 where he lived independently for 4 years in Rolling Green Village. He was a man of strong character who always kept his word, and he never met a stranger. He made friends easily and kept them for life. His laughter and smile were things of legend, and he had an extraordinary gift for solving problems and telling jokes. He will be remembered fondly by so many. His legacy will be his family, who he loved and supported tirelessly, graciously, and ferociously. He was preceded in death by his parents, Okey and Ionia Christen; wives, Elaine Grove Christen, Paulene Smith Christen; daughter, Janis Jean Christen; sister, Alice Glenore Bauer; and brother, Hugh Owen Christen. Survivors: daughters, Rae Ann Christen (Robert) Gerhardt; Mary (Mark) Langlais; and Patricia (Joe) McWilliams, Grandchildren, Jess (Megan) McWilliams; Jeffrey (Amy) McWilliams, Ross (Laura) Redman; and Amanda (Tyler) Shelley and ten great-grandchildren. Memorial Service will be held on March 12, 2022, at 11 am in Blue Ridge Room D in the Village Center in Rolling Green Village, 1 Hoke Smith Blvd, Greenville, SC 29615. In lieu of flowers, please donate to your local pet rescue group, or charity of your choice.

Rolland Ray Christen (Chris), age 94, of Greenville, SC died peacefully on Jan 17, 2022, of natural causes. Born in Grover Hill, Ohio in 1927, he spent most of his youth in Payne, Ohio where he worked on his family farm until, as a member of... View Obituary & Service Information

The family of Rolland Ray Christen created this Life Tributes page to make it easy to share your memories.

Send flowers to the Christen family.