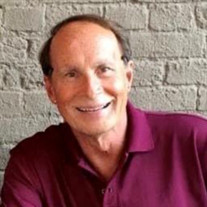 Ronald Philip Robertson, 73 known to many as "Ron", "R2" or "Captain" passed away suddenly in Pattaya, Thailand on August 18, 2021 while golfing with friends. For those of you that had the pleasure of knowing R2 writing this obituary is not something he would have been fond of....so I will write a summary of R2's Life Story. Ron was born in Portland, Tennessee. His parents relocated to Indianapolis, Indiana where he attended prep school and graduated High School from Warren Central. From there he enrolled at Ball State University in Muncie, Indiana where he pledged the Sigma Chi Fraternity. Ron always said that one of the best things he ever did was joining the Sigma Chi brotherhood. During his time at Ball State Ron held various positions within the fraternity and built many friendships that he maintained for more than 50 years. Throughout his life R2 remained involved with his Sigma Chi Fraternity with key roles, such as a Leadership Workshop Mentor, Consul, Pledge Class President, Grand Praetor, Grand Tribune, Constantine Sig along with several other local accolades associated with his Ball State local chapter. In addition to being a Sigma Chi, he participated in Student Foundations, IFC, Blue Key, and Who's Who. While at Ball State, Ron earned his Bachelor of Science Degree in Psychology with the graduation class of 1970. As Ron made his way into the work force he entered the Death Care Industry in Ft Wayne, Indiana where he developed his talents in Sales and Management. Many people knew Ron or worked with Ron during his 40 year career. He was known as someone who was fair and he really understood how to recruit, mentor, develop, and build sales organizations. Ron served the ACA, ICCFA, and held various Board Positions with several State Associations serving the Death Care Industry and was truly gifted when it came to public speaking. Ron was a member of the prestigious "Toppers" and "1 %ers." R2 had many circles, from the Cabin in Penhook, VA, to his weekly motorcycle rides, a trip or two to Sturgis, and several Conventions from New Orleans to Las Vegas, rarely did he meet a stranger. During Ron's life he chose to travel all over the world. He loved visiting new places and appreciated traveling through Asia and the Eastern Continents. As he was preparing to retire, R2 visited Pattaya, Thailand and he fell in love with the City. The beautiful blue ocean, scenic golf courses, Thai culture, and unique cuisine really appealed to him. In 2014, Ron made his decision and decided to relocate and retire in Pattaya. He spent his time golfing, where he managed to hit not one, but two hole in ones... He fished often, and like he did in the US he rode his scooter all over the Pattaya. As Ron settled into his life in Thailand, he met the love of his life, "New." She brought great joy to Ron's life and through the years they have traveled together to various places exploring and visiting historic sites of Thailand and all over Asia. As many of you know, Ron's mother and step father were a focal point in his life. Every year he would fly home from Thailand to celebrate his mother's Birthday. There was an inside joke in the family because Ron would write his mother a "birthday check" in the amount of her age year after year. I can remember R2 telling me that Janie would turned 91 this year, and we both talked about the "birthday check" and the dinners and memories that gift built over time. Sadly, on April 30, 2021 Janie passed away at home with her husband Dick, Ron and New by her side. Through the years Ron established many long term friends- there are way to many to name in this life story, but we thought it would be really neat to have friends and family take a minute and share your memories, or a story about R2 on this Tribute Page. As with all stories they come to an end... Ron's candle burned out on the 18th of August but his memories, his laughter along with the many contributions to many who knew and appreciated him will shine bright for many years to come. Ron wanted to make this world a better place, he left with love in his heart, peace, and a tremendous legacy that will live through all of those that he came to know. In lieu of flowers, R2 would want you to continue his legacy by volunteering and giving kindness and help to others who are in need. Farewell my friend... we will see you on the other side. RN

Ronald Philip Robertson, 73 known to many as "Ron", "R2" or "Captain" passed away suddenly in Pattaya, Thailand on August 18, 2021 while golfing with friends. For those of you that had the pleasure of knowing R2 writing this obituary is not... View Obituary & Service Information

The friends of Ron Robertson have created this Tribute Page to share your fondest Memories.

Send flowers to the Robertson family.