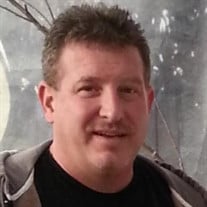 Scott Wesley Dickover, son of Wesley D. Dickover and Betty Whyde McIntosh passed away Thursday, 11 Nov 2021 at Bon Secours Hospital in downtown Greenville, SC due to complications of autism and liver disease. Scott was born in Newark, Ohio on 20 March 1969. Scott enjoyed computers and computer graphics as he worked for companies such as Check Robot, Productivity Solutions, IBM, Lenovo, and Toshiba as a mechanical engineer. Scott was creative and was able to obtain several patents for his work. He also enjoyed developing and creating 3D graphics and virtual reality programs. Even though Scott suffered from autism, he was able to achieve a high-level position with little to no formal training due to the complicated functioning of the nature of the autistic brain. His hobbies included creating computers, flying his drone, snowboarding in the Colorado Rockies, scuba diving, and Latin dancing. Surviving family members include his mother, Betty Whyde McIntosh and stepfather, James McIntosh of Greenville, SC, father, Wesley Dickover and stepmother, Phyllis Klop of Vero Beach, Florida, his sister, Carmen Dickover Martin, her husband Joel Martin, and their two sons, Ian and Eric Martin of Andalusia, Alabama. Scott's aunts and uncles include Aunt Bonnie McAuliffe, Uncle Billy and Aunt Wendy Whyde, and Uncle Dale Whyde. Also, Aunt Roberta Dickover, and Aunt Donna Parker. Cousins include Suzette and Robert Astarita, Leslie McAuliffe, Stacey and Eric Oitzman, Denise and Mike Sill, Todd Whyde, Brandy and Travis Thomas, Eric and Kim Dickover, Jeff Dickover and Nicki Dickover Winchester, Crissy, Kathy, Connie, and Jimmy Wright, and Kelly Wilson. Scott was preceded in death by his grandparents, Verla Whyde, Ivan Whyde, and Warren and Sarah Dickover Scott's wishes were to be cremated and his ashes to be scattered in the Atlantic Ocean. His wishes will be granted by his immediate family. We would like to thank Dr. Derek Fuessner of Charleston, SC, and the Medical University of South Carolina for their excellent care. In Greenville, SC, we would like to thank Bon Secours Hospital for their wonderful caring hearts, the physicians and nurses in the Emergency Department, and the second shift nurses on the sixth floor. All of them worked together to support us during the heartbreaking experience of losing our only son. We will eternally be grateful, The Family of Scott Dickover

The family of Scott Wesley Dickover created this Life Tributes page to make it easy to share your memories.

Send flowers to the Dickover family.