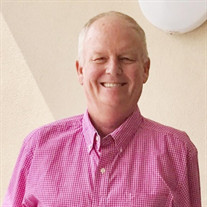 Ted Farley Mann, age 66 of Easley, S.C. was a friend to many and a stranger to none. He won his battle with cancer and went home to be with his Lord and Savior on Friday morning, April 29, 2022, surrounded by his loving family and friends. Ted was born on October 10, 1955, in Greenville, SC to Elmo and Opal Mann. He graduated from Berea High School in 1973 and excelled in football, basketball and track. Ted went on to Clemson University where his blood turned bright orange and he earned his degree in Business Management. In 1979 he walked into Berea Friendship United Methodist Church and met Becky Davenport. The attraction was mutual. Before she could get home from church Ted was calling her house to get her college address and phone number. Ted pursued and married his girl next door on August, 9, 1980. Together they shared 41 years of love, adoration, travel, children, and life adventures. Ted was a devoted, loving, focused and hardworking husband, father, son, brother, and grandpa. He and Becky have 3 children and 4 grandchildren. When Ted was not providing for his family, he enjoyed walking, Fox News and talking to friends and family. He played golf, ran and did anything he could active outdoors. He possessed a strong conservative view…..which he never hesitated to share. As a connoisseur of music, he preferred to start each day with a cup of coffee and his oldies echoing through the house. He never did anything halfway and his meticulous character didn’t miss much. He loved his Clemson Tigers and followed his team wholeheartedly during football season. Ted was employed with Southern Weaving for 28 years and then the Lear Corporation until his retirement in 2016. Ted and Becky fell in love with Litchfield beach on their Honeymoon and got involved with the Litchfield Inn Owners in 2016. He had a servant’s heart which saw a need then put action behind it. Often, he traveled to Litchfield to stay on top of happenings and updates at the Inn. He kept a close eye over all the sand dunes fences which he himself installed, and loved painting and updating his rooms. In the evenings if Ted was at the Oceanfront Litchfield Inn, you could find him holding court around the Litchfield Inn pool with people who soon became his dear friends and Litchfield family. He is proceeded in death by his parents, Elmo Lester Mann, and Opal Allen Mann, as well as his stepmother, Jean Cox Mann. He is survived by his sister, Kim Mann Embler, his adoring wife, Becky Davenport Mann; sons, Christopher Allen Mann and Ryan Farley Mann, daughter, Rebecca Reagan Jordan (Hunter) and the light of his eyes his grandchildren Marcus Wagner (Mann), Macy Beck Jordan, Edwin Jordan, and Harrison Jack Jordan. As a current member at Bethesda United Methodist Church of Powdersville, Ted was active in the Adventures in Faith Sunday School Class. Ted claimed Christ as his personal Lord and Savior and was baptized at Berea First Baptist Church. Prior to his time at Bethesda UMC, he attended Berea First Baptist Church and Berea Friendship United Methodist Church. He understood that it is only by a personal relationship with Jesus he could enter Heaven and good works would never be enough. We find rest in knowing he has eternal life; he has been healed and we will be reunited again. A memorial service is planned for Saturday, May 14, 2022 at Berea First Baptist Church, 529 Farrs Bridge Rd., Greenville, SC 29611 at 3 pm. in the sanctuary. The family will receive friends between 1:30 and 2:45 pm in the Visitors Center. Afterward, family and friends are invited to a Celebration of Ted’s Life at his home, 227 Pine Ridge Drive, Easley SC 29642 between 5 to 7:30. Be prepared for food, fun, some great “Oldies” music and stories of Ted’s life and escapades. Becky and the kids need to hear those so much. He was larger than life! In lieu of flowers, memorial gifts may be made to The Cancer Society of Greenville, 113 Mills Avenue, Greenville SC 29605 or your church or charity of choice in honor of Ted Farley Mann. If you would like to contribute to Ted’s Church, it is Bethesda United Methodist Church, 516 Piedmont Rd., Easley SC 29642. The family appreciates the love shown them in so many ways, and asks for continued prayers.

Ted Farley Mann, age 66 of Easley, S.C. was a friend to many and a stranger to none. He won his battle with cancer and went home to be with his Lord and Savior on Friday morning, April 29, 2022, surrounded by his loving family and friends.... View Obituary & Service Information

The family of Ted Farley Mann created this Life Tributes page to make it easy to share your memories.

Send flowers to the Mann family.