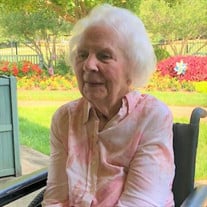 Vivian Frances Bornhoeft was born in Fox River Grove IL on August 11, 1920, and died at The Woodlands at Furman in Greenville SC on September 12, 2021. Her parents, whom she lost at the age of three, were Frances Skala and Edward Konopasek. After growing up in Chicago, she moved to Mt. Prospect IL in 1943 with her husband, Richard R. Young, Attorney at Law. After Mr. Young’s demise in 1975, she married James J. Bornhoeft, Jr., who died in 2006. She relished her participation in the life of the small town of Mt. Prospect, attending The South Church, frequenting the public library, serving as president of the local women’s book club, and as a docent for Mt. Prospect Historical Society. Vivian also enjoyed traveling domestically and abroad and playing cards with her many friends and relatives. One of her volunteer jobs was recording books for the blind. For 21 years she worked as a correspondent for Avon Products in Morton Grove IL. In 2016 she moved to The Moorings of Arlington Heights IL and in 2017 to The Woodlands of Greenville SC. We will all miss her winning smile, her pert sense of humor, and, most of all, her love. Her six siblings predeceased her, as did six of her eight nieces and nephews. She leaves behind her daughter, Sharon Young Cherry (Maurice) of Greenville SC, her son Richard Konrad Young (Patti) of Lake Forest IL, grandchildren Brennan Young (Heather), Colin Young (Pei), Eileen Stocco (Greg), Amber Young (Cass), Richard D. Young, Gwendolyn Woodard (Sterling), Madeleine Cherry (Patryk), and ten great-grandchildren, as well as the families of her stepchildren, the late James Bornhoeft III (Joy), Sue Bouck (Russ), Laura Kleiner (Bob), and Charles Bornhoeft (Mary). Survivors include her nieces, Connie Langheinrich and Meredith Mason (Tom), great-nephew Michael Snyder (Diane), great-niece Barbara Rock (Ted), and numerous nieces and nephews on Richard R. Young’s side. A memorial service will be held in the spring of 2022 in Mt. Prospect IL. Donations may be made to the Mount Prospect Historical Society, 101 S. Maple St., Mount Prospect IL 60056-3229.

Vivian Frances Bornhoeft was born in Fox River Grove IL on August 11, 1920, and died at The Woodlands at Furman in Greenville SC on September 12, 2021. Her parents, whom she lost at the age of three, were Frances Skala and Edward Konopasek.... View Obituary & Service Information

The family of Vivian Frances Bornhoeft created this Life Tributes page to make it easy to share your memories.

Send flowers to the Bornhoeft family.