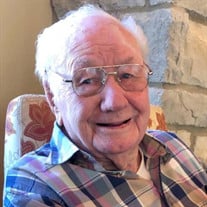 William Othello “WO” Adams, Sr. of Abbeville, SC died August 21, 2021 at the age of 97. Born October 5, 1923 in Kirksey, South Carolina, he was a son of the late Julian Othello and Leila Johnson Adams. WO graduated from Class 144 US Army Parachute School in Ft. Benning, GA followed by a tour of duty in Europe. He served in World War II, a Paratrooper in the 325th Glider Infantry. He completed his tour of duty in Ft. Bragg, NC as a member of the 82nd Airborne Division. WO was later employed by Seaboard Airline Railroad/CSX as a conductor and retired after 38 years. WO enjoyed gardening, raising goats and telling stories of his many adventures. He had a lifelong love of macaroni pie, extremely sharp cheddar cheese, coconut cake, ginger snaps and buttermilk served with hoecakes. WO taught his grandchildren how to shoot a rifle, start a fire with a magnifying glass and to always pay your debts. WO excelled at growing flowers, woodworking, driving the tractor into the creek, getting pulled down by the garden tiller and outsmarting squirrels. He was fond of saying “he who knoweth to do good better do it”, his own version of bible verse James 4:17. He took fashion cues from no-one. His signature every day look was a plaid pocketed button down shirt, always with a good pen in his shirt pocket, and jeans with a firmly pressed leg crease. WO will be affectionately remembered by his wife Maude Adams and children Nancy (Bill) Whitmire, Buddy (Debi) Mew, Pamela Petersen, Marsha Meyer, grandchildren William (Michaela) Scaff, Zachary (Grace) Scaff, Katie Scaff, Rachel Mew, Sarah (Aaron) Lane and great-granddaughter Evelyn Lane. He is predeceased by son, William Othello “Wildcat” Adams, Jr, grandson Homer Whitmire, brother Thurmond Johnson “TJ” Adams and Kenneth Mew. A celebration of WO’s life will be held on Thursday, August 26th 6:00 PM at South Bend, the family “Old Home Place”, 122 Old Mount Moriah Road in Greenwood, SC 29646. We ask that attendees be mindful of and adhere to COVID guidelines for the safety and well-being of all. The family would like to thank the Hospice staff in Greenwood for their exceptional care during WO’s final weeks. Memorial donations may be made to Lighthouse Baptist Church at 2918 SC Hwy-72 East, Abbeville, SC 29620 or Hospice of the Piedmont at 408 West Alexander Avenue, Greenwood, SC 29646.

The family of William “WO” Othello Adams Sr. created this Life Tributes page to make it easy to share your memories.

Send flowers to the Adams family.